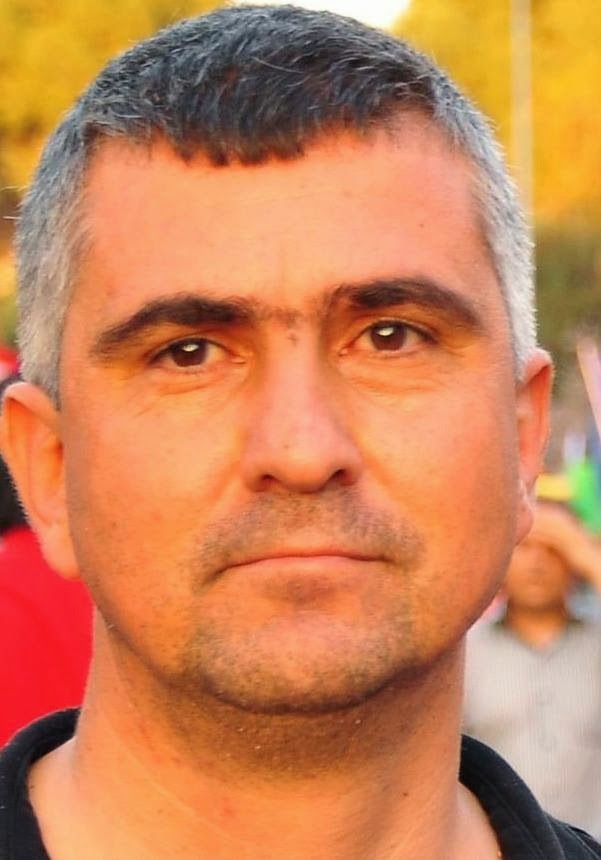 No to Compulsory Military Service Movement was shocked to know that the Turkish Cypriot Conscientious Objector Murat Kanatli was sentenced to 10 Days in prison for objecting to participate in the annual compulsory military exercise in the northern part of Cyprus on the basis of his ideological conscientious objection. Murat Kanatli has been always a friend of our movement, and was present in Cairo during the trial of the founder of our movement, Maikel Nabil Sanad, in October 2011. We call for his immediate release and recognition of his right in conscientious objection to the military service.

Murat Kanatli had declared his conscientious objection in 2009, stating that his goal is for the human resources of war to dry up and that personally he will not participate in any war, so it is meaningless to participate in any preparation for war. “If there was a war in Cyprus, I would not take sides. Who are our enemies? Is it anyone who is on the other side of the barbed wire? Are our enemies the friends that we drink coffee with every day in Ledra Street?” Since then he has refused each year to participate in the annual compulsory military exercises in the northern part of Cyprus. On 14th June 2011 he was summoned to appear in the Military Court on charges relating to his refusal in 2009. After numerous postponements, on 8 December 2011 the Military Court accepted the demand of Murat Kanatli to refer his case to the Constitutional Court, as it refers to freedom of conscience which is a human right guaranteed by the constitution.

The Constitutional Court in its Judgment on 10 October 2013 expressed that opposition to military service, where it is motivated by a serious and insurmountable conflict between the obligation to serve in the army and a person's conscience or his deeply and genuinely held religious or other beliefs required the protection of the human right to freedom of thought which exists in Article 23 of the Constitution and is safeguarded in Article 9 of European Convention of Human Rights and Article 18 of the International Covenant on Civil and Political Rights. However, the Constitutional Court went on to state that compulsory military exercises do not constitute a conflict with the Constitution. The Court added that the duty is upon the legislator to provide in laws and regulations for alternative service to military service and when doing so to review the article of the Constitution that relates the right and duty to homeland to armed service only.

After the decision of the Constitutional Court the trial of Murat Kanatlı continued at the Military Court which delivered its judgment last Tuesday, 25Th Feb 2014, stating that the right to conscientious objection is not regulated in domestic laws and it only took the constitutional provision on right and duty to homeland to armed service and the relevant legislation on armed services while disregarding the decisions of the European Court of Human Rights. The Court went on to state that even if it was going to give a judgement in the light of the relevant case law of ECtHR, Kanatli was objecting to serve due to his political beliefs which the Court did not consider to constituting a conviction or belief of sufficient cogency, seriousness, cohesion and importance to attract the guarantees that are safeguarded in Article 9 of ECHR. Furthermore, the Court continued to say that as alternative service is not regulated and because of the existence of the Cyprus conflict the case would fall under the limitation because it considered the regulation to be necessary in a democratic society in the interests of public safety. The court handed down a penalty of 500 Turkish liras or 10 days imprisonment if Kanatli failed to pay the penalty. Upon his refusal to pay the penalty Kanatli was sent to serve 10 days in prison.

It is important to state that this decision is solely regarding the refusal to participate in the year 2009. The cases relating to objection to serve in 2010 and 2011 are still pending.

We would remind the authorities in the northern part of Cyprus that last September the UN Human Rights Council adopted without a vote Resolution 24/17, in which it recognises "that conscientious objection to military service derives from principles and reasons of conscience, including profound convictions, arising from religious, ethical, humanitarian or similar motives". The convictions revealed in Murat Kanatli's declaration cannot be dismissed as merely his political opinions. We would also point out that in the same resolution the Human Rights Council emphasised that "States should take the necessary measures to refrain from subjecting individuals to imprisonment solely on the basis of their conscientious objection to military service and to repeated punishment for refusing to perform military service," and recalled "that repeated punishment of conscientious objectors for refusing a renewed order to serve in the military may amount to punishment in breach of the legal principle ne bis in idem;".

No to Compulsory Military Service Movement also supports the call of the Initiative for Conscientious Objection in Cyprus for the international community to express its solidarity with Murat Kanatlı and send letters of protest to the Turkish Cypriot authorities as well as Turkish authorities’ embassies abroad which is the country directly responsible for human rights violations in the northern part of Cyprus following the Turkish invasion of the territories in 1974.