A Conversation on Twitter between Movements.org, Emad and Fathy on Conscientious Objection

Movements.org: how long has it been since you refused to obey compulsory military service in Egypt?

Emad: I was required to be present at the recruiting area on January 2012. I didn't and declared my refusal on April.

Movements.org: Wow, over 1.5 years since you refused compulsory service. What has the response been from the Egyptian govt and others?

Emad: The Egyptian military and the government don't care, they didn't even bother to respond to my letters I sent them twice.

Fathy: they ignored us and never respond to the letters

Movements.org: Are there restrictions on what you can do now?

Emad: I'm not allowed to make post-graduate studies, to work or to travel abroad. The military can arrest and capture me for 3 years!

Movements.org: What demands do young refusers have of the Egypt govt & military?

Fathy: That is transfer me for the civil service do not follow the military in anything

Movements.org: Is govt under el-Sisi more restrictive to you & other refusers?

Emad: The government under el-Sisi isn't different at all from the governments under Morsi or Tantawi. It's all the same regime.

Emad: Egypt's military service is a perfect example of modern slavery that the world chose to stay silent on.

Fathy: i do not believe in war or using weapons and violence is solution for making peace

Movements.org: Is the #NoEgyptMilService message accepted in Egypt? Obviously government has come down hard on you, but is the message growing?

Emad: #NoEgyptMilService message is growing but slowly and totally accepted by whom it concern most: potential recruits

Movements.org: What resources/actions can human rights groups & others contribute to the cause #NoEgyptMilService? What support do you need?

Fathy: in Egypt we need the NGOs to be more legally cooperative

Movements.org: What do you think of the American military assistance to Egypt?

Emad: It's a military assistance, not for helping liberties, however it was a promise from the US to Egypt after Camp David accords.
Egypt has and continues to violate the Camp David accords, yet Israel and the US never bothered to complain.

Fathy: I think its time to assist Egypt in the field of liberties instead

Movements.org: What's next for you personally @EmadPax @Fathy ? Any optimism that your punishment will end for saying #NoEgyptMilService?

Emad: Everything is possible. I believe that things change when people start to think deeply and with compassion, to choose to change

Fathy: When people realize that violence and wars are a closed circle not producing real peace or tolerance, and when people ask for a civilian service 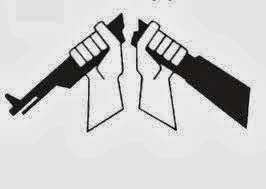 War Resisters' International is considered the largest gathering worldwide for the pacifist and the anti-militarist organizations. It was established in 1921 after the end of the first world war, as a humanitarian reaction to the bloodshed in the war. The organization includes in its membership more than 80 local organizations in more than 40 countries around the world. It aims at abolishing wars, militarism and compulsory military recruitment.

Related:
WRI Affiliates
at 14:09 No comments: