Statement: Conscription and the Crime of Assaulting Freedom to Travel 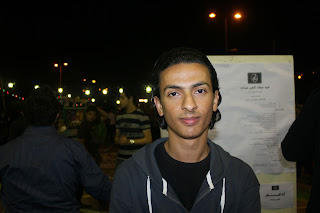 The passport authorities in Cairo's airport prevented the activist, Mark Nabil Sand, a member of No to Compulsory Military Service movement, from traveling on Monday, April the 23rd, 2012, under the pretext that the Ministry of defense don't give such permits for university students unless during the vacation of the middle of the academic year or the vacation of end of the academic year.

It's worth mentioning that the constitutional declaration states in the eighth article, that "the personal freedom is safeguarded, untouched, unless in a case of flagrante delicto, no person may be arrested, inspected, incarcerated, have his freedom restricted by any restrictions or prevented from mobility except by a command necessitated by investigations and preservation of public security, this command is issued by the competent judge or the public prosecution", which confirms that the right to travel is constitutionally safeguarded and that the only bodies which have the authority to prevent traveling are the judiciary and the prosecution. The constitutional text doesn't give the ministry of defense the authority to prevent citizens from traveling.

Upon these decisions, which are established by the ministry of defense, we consider them unconstitutional decisions, as well as dropping the international legitimacy, violating the right to travel and mobility which are stated in the international human rights laws. We also consider it a punishment for humans without committing crimes. The rights for a human shouldn't be forfeited except for a crime and it must be done through the judiciary authorities not the executive authorities.

Therefore, the movement will take all the possible local and international legal procedures to obligate the military establishment of Egypt to respect the basic human rights and for the youth of Egypt to regain their freedom of travel and mobility without an intervention from the military authorities.